Every day, 50,000 cars thunder up and down the Western Freeway between Melton and Caroline Springs. In one stretch where thousands of new homes are being built, dirt roads are the only way in or out.

It is a region projected to grow to more than 400,000 people – the size of Canberra.

Which is why on Sunday, Melton City Council and, perhaps a little unexpectedly, Victorian senator Derryn Hinch, went to lobby the state and federal governments for a $78 million road upgrade.

The council has asked the Andrews and Turnbull governments in budget submissions to improve the freeway – for better road safety, and so future residents of the under-construction Thornhill Park estate can get around.

About 83 per cent of people with a job who live in Melton Council’s area must travel outside the municipality for work, making proper roads and trains essential.

Compare this with the infrastructure-rich Melbourne City Council. There, 63 per cent of the people with a job work within their own municipality.

To underscore her council’s point about Melton’s have-nots when it comes to driving, mayor Sophie Ramsey went to the intersection of potholed and muddy Paynes Road and the Western Freeway in Rockbank on Sunday.

“This is a nationally significant highway, less than 30 kilometres from the Melbourne CBD, yet it is clearly substandard,” Cr Ramsey said. 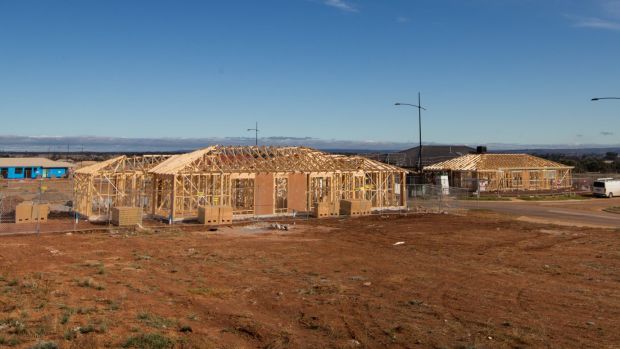 The council wants to see the freeway upgraded to three lanes each way from two, and flyovers and interchanges built at the Paynes Road intersection, at Mount Cottrell Road and in the Melton West area.

Standing with Cr Ramsey by the busy freeway, Senator Hinch said that in his former life as a journalist he had loathed using the word “infrastructure”, but on his tour of outer Melbourne areas like Melton, he was learning its potency.

“When you are standing here and people tell you the population of this area could increase in the next few years to 400,000 people, then you know that infrastructure is not only the best word, it is the most important word,” he said.

Senator Hinch said Canberra and Spring Street needed to work better together to resolve transport funding for areas where population growth was skyrocketing, as it is in Melton.

He said Canberra’s experience of having funded the dumped East West Link had likely not given it much confidence in handing over large amounts of money.

“When a state government blows a billion dollars not to build a road, it does not give you much muscle when you [go back to] ask for more money.”

Melton Council argues that upgrading the freeway would, for every dollar spent, generate $2.20 worth of benefits. It would also mean there was a full freeway running the entire way between Melbourne and Ballarat.